This article was written by Nicolas PERAUDEAU and published on : October 2nd 2019

A feed-in remuneration is a support scheme allowing the producer of renewable energy to receive a direct payment per unit of energy produced. This feed-in remuneration can be a tariff, like a preferential price covering the full generation costs, or a premium, which provides a ‘bonus’ for the producer to cover the financial gap between the generation costs of using renewable energy versus using conventional (fossil) energy.

Feed-in schemes are very efficient to increase the deployment of RET, as they cover the higher cost of RET by compensating the owner with a higher price for the renewable generation. A feed-in remuneration scheme creates opportunities for business cases as it can cover the financial gap between RET and conventional technologies. Feed-in tariffs or feed-in premiums for electricity from renewable sources are the most common, but also exist for renewable heat. 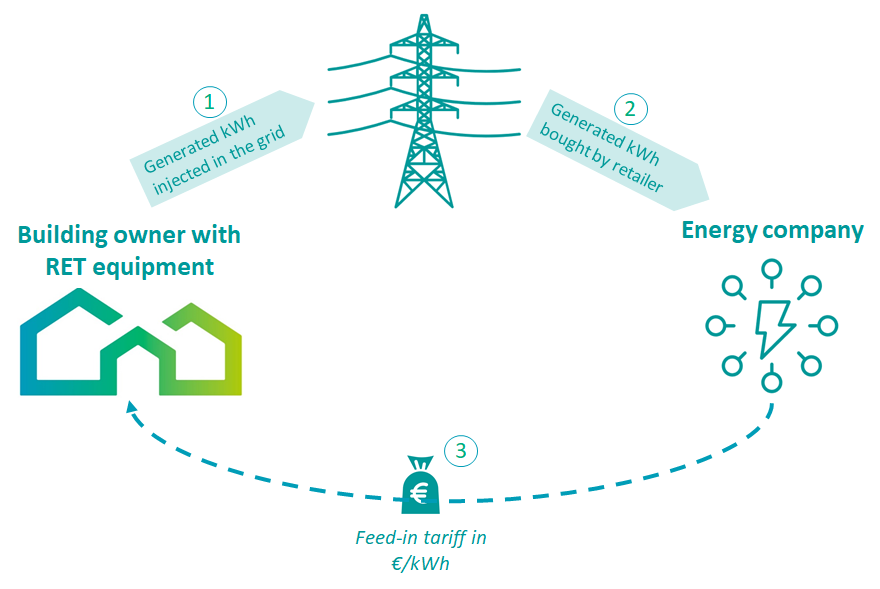 Through a feed-in remuneration scheme the producer of renewable energy receives a direct payment per unit of energy produced. A feed-in scheme guarantees access to a predictable and long-term revenue stream, which can serve as a stable basis for a business model.

In addition to the tariff scheme, in which the producer gets a fixed price for the supply of energy, and the premium scheme, in which the producer gets a premium in addition to income from selling the energy on the market, hybrid forms are also possible. In these, the premium complements the income from the market, to jointly cover the generation costs. Producer gets a fixed amount, but from two different sources. This hybrid form is similar to a feed-in tariff for the investors, but it has different consequences for government expenses.  A feed-in scheme typically publishes rates per energy unit for eligible production (e.g. in €/GJ or €/kWh). If a producer is eligible, a contract (or agreement) can be obtained from the government that allows the producer to claim the specific tariff (or premium) for every unit produced. This agreement fixes the conditions and levels of the tariff, typically 8-20 years depending on the technology. So once an agreement is entered, this is virtually risk free. Some feed-in schemes only cover energy that is delivered to the grid, whereas other schemes also cover auto-production (using generated energy for own purposes).

Feed-in schemes do not look at specific projects and real costs, but instead use cost estimates per category. As a result, within a category some initiatives may be economically viable whereas others are not. To build a viable business model based on a feed-in scheme, the investor has to undertake a careful assessment of the project economics taking into consideration e.g. climate conditions for solar PV or heat pumps, technology costs, and fuel prices, e.g. prices of biomass for a biomass boiler.

In the case of building refurbishment, feed-in schemes can be used by households and small/medium enterprises who want to generate their own energy using renewable sources (e.g. solar-PV or biomass heating). Such business models by households or SMEs can be focused on production for own use, or for the sale of energy to the grid. Feed-in schemes typically differentiate in categories by size of the installation, technology and fuel used. The level of remuneration is based on the category specific generation costs (usually estimated through the size of the installation, for instance installed capacity in kWp for PV), but the actual payment is based on production (e.g. kWh of electricity).

The main advantages of a feed-in based business model are the following:

Feed-in based business models are applicable for all market segments: new and existing buildings, public, commercial/industrial and residential buildings. Eligible market segments depend on the policy specificities in the country or region.

The two main actors in a feed-in scheme are the institution that makes the payment available (government, network operator, energy supplier) and the recipient (home-owner, building manager, or energy service company).

Generally, feed-in schemes, and associated business models, can be designed for all technologies that generate heat or power (or both). Many RET require high up-front investments and when this is a barrier for investors, a part of the feed-in tariff may be made available as investment subsidy. 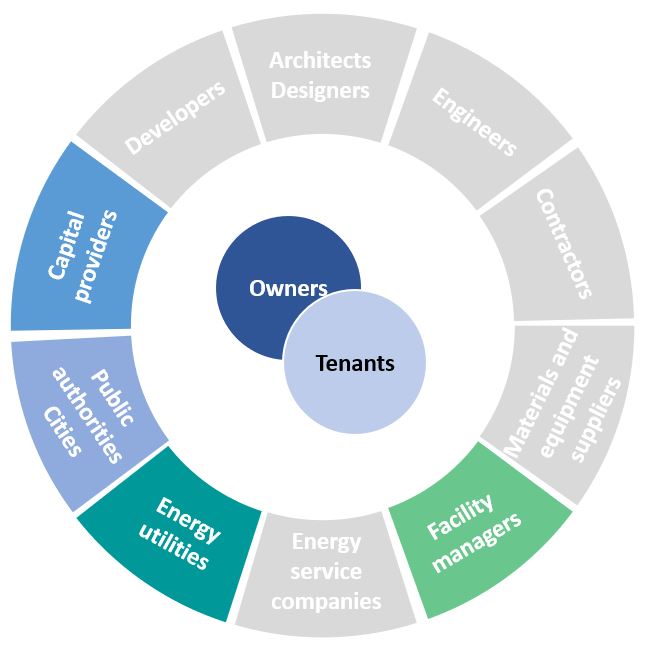 "Why” (revenue model and cost structure)

In practice, the tariff or premium is based on the estimated generation costs over the lifetime of the installation, which makes it more suitable for technologies that are available off-the-shelf (e.g. solar PV for electricity generation or heat pumps for heat production) and disadvantageous for innovative technologies. Some schemes mainly cover electricity production and an additional ‘bonus’ is made available if associated heat is put to productive use. The actual payment can be executed through a government agency, the energy supplier, or through the network operator.

email
We use cookies to ensure that we give you the best experience on our website. If you continue to use this site we will assume that you are happy with it.Ok